DON'T Get Eyelash Extensions Until You See This!

If you've ever longed to have long, thick eyelashes, this article is for you. Unfortunately, for those with dry, irritated eyes, using loads of mascara is out of the question because the ingredients can be irritating and lead to more inflammation of the eyes.

You may think that eyelash extensions are the next best option for fuller lashes, but this is not always the case. Lash extensions come in many different forms, including less expensive synthetic false lashes, silk lashes, those made of mink, and even magnetic lashes. Although some synthetic lashes can be bought in a drugstore and applied at home, other forms are readily available for application in salons around the world.

Once you've selected your type of eyelashes in a salon, the lashes are applied one at a time using a semi permanent glue. Sadly, this glue often contains formaldehyde, latex, and other harsh ingredients that can be horrible for sensitive eyes. Some lashes can actually be tied onto your own, but these are still not free of complications. If you're set on having a full set of lashes applied, you're in for a two hour appointment with touch-ups recommended every few weeks. If you only wish to have a little enhancement, you could also have them apply just a few lashes.

So, you might ask, what's the big deal? Yes, your eyes will be closed the entire time the procedure is going on. If you're at a reputable, licensed salon, they're going to have trained lash technicians who will avoid getting the glue into your eyes at all costs. However, that doesn't mean you're immune to complications. As we've said before, anyone can react to anything at any time.

Complications from extensions can include allergic reactions to the adhesive, natural eyelash loss, inflammation of the cornea and conjunctiva, eyelid bumps, abrasions, and conjunctival bleeding.

Although this seems like a large variety of things, the most common issue (and one that can contribute to almost all of the conditions mentioned above) is inflamed eyelids.  This can occur for many reasons, but the most likely culprit in this case is bacteria build up. As bacteria increases around your natural eyelashes and extensions, this bacteria multiplies and creates biofilm. Biofilm begins to invade the lash follicles and can soon affect the meibomian glands of the eyelids.

The first step to avoiding complications from lash extensions is to make sure you're at a salon with licensed lash technicians. These people have been trained to prevent infection and complications when applying your lashes. Make sure they use a better (less harsh) adhesive, such as Milante Beauty Super Strip Lash Bond.

Although further care depends on what adhesive is used, it is generally accepted not to use alcohol or oil-based makeup remover products on your eyelashes, as these can damage the adhesive and cause your eyelashes to fall off.

How To Prevent Eyelash Extension Complications

It is also incredibly important to keep the eyelids and lashes extremely clean when you have lash extensions, because they can breed bacteria and cause overall inflammation and nasty infections. We recommend using ahypochlorous acid eyelid cleanser each morning and evening for best results. The Heyedrate Lid and Lash Cleanser is perfect for this because it contains no alcohol, no harsh chemicals, and no oil which could damage your lashes. Other Forms of Eyelash Cosmetics and Extensions To Be Cautious Of

Although magnetic lashes do not use any adhesive, they can still be problematic for those with irritated eyes to begin with. Magnetic lashes are applied with magnets either around your natural eyelashes or attached to magnetic eyeliner. Risks can still include mechanical trauma to your cornea, lashes that fall or break off into the eyes, and bacteria build-up leading to infections.

This is an interesting one! Eyelash perming is done by wrapping your eyelashes around a metal or plastic rod while perming solution is applied (NOTE: very close to the eyes!) Although the eyes are closed when this procedure is performed, it is not impossible for the solution to get into the eyes, just like eye makeup remover will get into your eyes because the eyelids do not create a tight seal. Perming solution can cause a whole host of issues including redness and inflammation, allergies to the solution, and infection.

Eyelash tinting is another interesting one which uses hair dye very close to the eyes. Keep in mind that hair dye is often "permanent" and cannot be removed for weeks or months, so if you happen to be one of the (un)lucky ones who reacts to the dye, you're going to be dealing with complications for months.  Our opinion? Stay away!

Now you're thinking, "I'll just forget about mascara and extensions and use growth serums instead"...Well, I hate to be the bearer of bad news, but this isn't better for those with sensitive eyes either.

Latisse, the only FDA approved eyelash growth serum, was approved in 2008 and was quickly followed by other non-prescription growth serums flooding the market. Nearly ALL growth serums contain synthetic prostaglandins, which actually cause inflammation in your body. So if you use an eyelash growth serum, you're bound to end up with red, irritated eyes and eyelids, hyperpigmented skin, changes in eye color (light to dark), itching, and other complications.

If you want to try one that may be less irritating, try a non-prostaglandin formula like Ocusoft's Zoria. This still contains some potentially harsh ingredients, but it's the best of the bunch when it comes to those with dry, sensitive eyes.

Although this doesn't fall under the quest for long, beautiful eyelashes, it does often go right along with it. Because some people with dry eyes cannot tolerate commercially available eyeliner, they turn to tattooing.

However, just like eyelash extensions, this is not without complications! Tattoo ink can cause allergic reactions and inflammation because it contains iron oxides, aluminum silicate, and carbon nanoparticles. This can cause bruising and swelling, allergies, infections, scarring, and the ink will actually fade over time. So, if you wanted black eyeliner, you may eventually end up with blue eyeliner.

How To Clean Eyelash Extensions

It is so important to keep your eyelash extensions clean, because it’s easy for bacteria to build up and cause problems. The last thing you want is to have a big puffy eyelid to show off at your next get together with friends! Care is super simple, though, and we’re going to go over how to care for your eyelash extensions properly.

First, remove your makeup and wash your face as you normally would with a gentle cleanser (no oil-based cleansers or those containing alcohol). Dry your face. Spray hypochlorous acid eyelid and eyelash cleanser to a cotton ball or round and apply, then let it dry.

Hypochlorous acid solution will not damage the adhesive of your lashes. It only contains 3 ingredients, hypochlorous acid and electrolyzed water, which is water and salt.  You might also notice a side effect of this as well. Your eyes feel more comfortable!

An over-the-counter Hypochlorous Acid alternative, the Heyedrate Lid and Lash Cleanser is a fast-acting, specially formulated hypochlorous acid spray ideal for deep cleaning around the eyes.

The Heyedrate Lid & Lash cleanser is formulated with three ingredients: 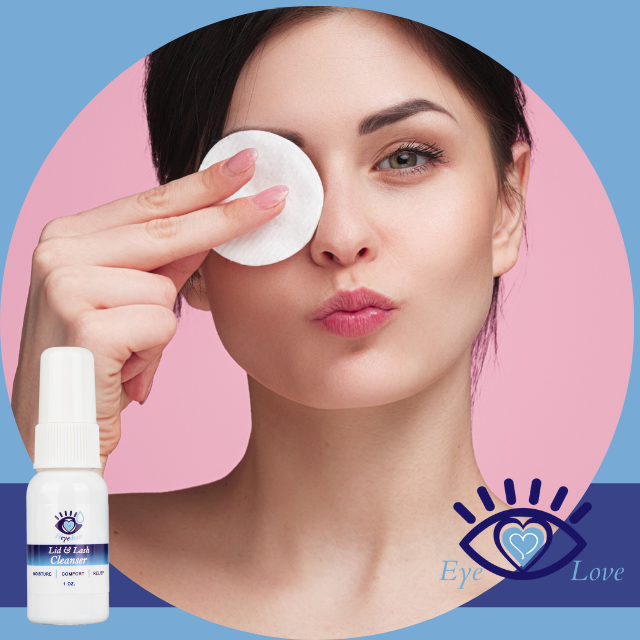 Magnetic Eyelashes: Healthy or Not?

We touched a bit on magnetic eyelashes above, but we wanted to bring you a different perspective. Dr. Anika Goodwin is an ophthalmologist specializing in oculoplastics, meaning she gets to help you attain functional and beautiful eyelids again (among other things). Dr. Goodwin is a self-proclaimed lash girl, but she’s not someone who loves makeup. Lash extensions help her look put together without all of the fuss of makeup, and she’s been on a search for the healthiest lash options out there.

Not One Size Fits All

Lash extensions are not one-size-fits-all, and individual variations can mean that some people may have complications where others do not. In an attempt to avoid some of these issues, Dr. Goodwin helped optimize the products from Opulence MD Beauty which specializes in magnetic eyelashes.

Magnetic eyelashes can be a better option for those who desire to wear lash extensions. These lashes make use of tiny magnets on the eyelashes combined with magnetic eyeliner. The eyeliner uses iron oxides, which are known to be magnetic. This option is not only quick and easy, but you’re also able to remove them at night. You’ll be removing the eyeliner and cleansing your eyelids and lashes every single night. The lashes also don’t attach to your natural lashes, so there’s minimal risk of damage to your natural lashes.

Opulence MD lashes use a healthier magnetic eyeliner along with smaller magnets than the traditional magnetic lashes you’ll find in the drugstore. Although they’re not perfect, they’re a safer alternative to lash extensions. Dr. Goodwin has tried these lashes on many individuals, including those with sensitive eyes in general. She’s found great success with them and has only had a handful of people who have seen reactions with them.

The lashes and eyeliner are latex and paraben free, and she leads groups that help those wearing the product take care of them more effectively. She’s constantly educating her customers on proper eyelid cleansing and the care of their magnetic lashes.

The natural eyelashes do have a purpose and they’re the first line of defense for eye protection. In fact, those on some pressure lowering medications are prone to longer, fuller eyelashes that can be problematic. People taking these medications may notice more tangling of the eyelashes and even greater lash loss. It’s possible to have too much of a good thing when it comes to long eyelashes.

If you’re interested in checking out Opulence MD Beauty, make sure to follow @dranikaMD and @opulentlashlife on social media. You can find their products on the Opulence MD website.

We, Eye Love, LLC, are a participant in the Amazon Services LLC Associates Program, an affiliate advertising program designed to provide a means for us to earn fees by linking to Amazon.com and affiliated sites. MediViz and Heyedrate branded products are made by our company, Eye Love, but we truly believe that our products are the best on the market! It is important to know that our products are not intended to diagnose, treat, cure, or prevent any disease.