When You Should Get Lipiflow, BlephEx, and IPL for Dry Eye Treatment

Dr. Brian and Dr. Tyler met in optometry school and successfully opened Premier Eye Doctors by differentiating themselves from other practices in the area. Dry eye disease is something that is a pain point for so many people, yet the protocol is often to throw artificial tears on it and be done. They knew this wasn’t the answer and have since found better diagnostic equipment and more effective treatments to help their patients.

Dry eye disease is more than just treating the symptoms. You have to find the root cause of the condition and treat patients earlier where possible, as this can prevent many of the severe cases. Coming up with a personalized treatment plan is what the doctors specialize in. Dry eye management can be incredibly rewarding because these patients are miserable and looking for answers.

When a patient enters their office, they receive a dry eye questionnaire. Any person who has even just one symptom will be screened with a TearLab tear osmolarity test or a keratograph tear breakup time (TBUT). Before they walk in the room with the patient, they can usually see if this patient will need a full dry eye evaluation.

If a patient is found to need further examination, they will be scheduled for a dry eye evaluation consisting of tear osmolarity testing (if it hasn’t already been done), InflammaDry to check for inflammation in the tears, and meibography to view the meibomian gland structure. This allows the doctors to target what the patient actually needs.

A science based approach is used, and the doctors usually follow the DEWS II protocol. Some patients need stronger anti-inflammatory treatments than others, and these diagnostic tests allow the doctors to make the correct decisions on what individual patients need. 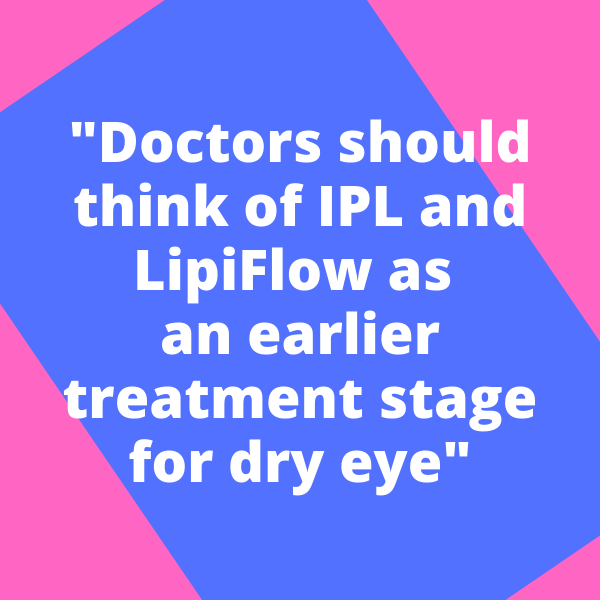 After seeing that patients were having a difficult time being consistent with at-home treatments, the doctors decided to shift their approach. Although they still recommend at-home eyelid hygiene such as hypochlorous acid, they prefer to treat patients in their office with BlephEx, LipiFlow, and/or IPL.

If a patient is having difficulty complying with treatments at home, they will recommend one of the above treatments. These treatments are usually more effective for patients as well. To decide what an individual needs, the doctors look at all of their diagnostic testing. If the patient has more of an issue with meibomian gland dysfunction, stagnant oil, and atrophic glands, but minimal inflammation, LipiFlow treatments will be started. Elevated InflammaDry, eyelid margin telangiectasia and rosacea will signal that the patient will likely benefit from IPL. Some patients have more severe inflammation as well as blocked glands, and these patients will undergo both treatments. BlephEx is bundled with every other treatment because of the importance of removing biofilm. Dr. Samartino completed his undergraduate study with TriBeta honors in Biology at McDaniel College in Westminster, MD. He received his Doctorate of Optometry from the Pennsylvania College of Optometry at Salus University.

During his studies at the Pennsylvania College of Optometry, Dr. Samartino completed externships in Pennsylvania, New Jersey, and Alaska with clinical honors. Before establishing Premier Eye Associates, he practiced full time in the South Jersey area. During this time, he worked at an ophthalmology practice where he served as the contact lens specialist and practiced medical optometry including care for post operative cataract, retina and LASIK patients.

Dr. Samartino, originally from South Jersey, currently lives in Philadelphia. His interests include watching movies, hiking, watching Philadelphia Union and the US Men's National Team play soccer, and playing with his dog, Cessa.

During this time, he rotated through the Baltimore Veteran’s Hospital and attended regular lectures at the prestigious Wilmer Eye Hospital. He then completed a residency specializing in ocular disease at the Wilmington Delaware Veteran’s Hospital. There, he managed a large amount of eye disease including glaucoma, diabetic eye disease, macular degeneration, and cataracts.

Dr. Mills earned his fellowship with the American Academy of Optometry in 2013, a distinction less than 10 percent of optometrists in the country achieve.

Dr. Mills, Megan (his wife), and their daughter live in Haddonfield. In his free time, he enjoys watching Philadelphia sports, spending time with his wife and daughter, trying new restaurants, and spending time at the shore.

If you’d like to contact Premier Eye Associates in Collingswood, NJ you can give them a call at (856) 858-3937 or email them at info@premiereyedoctors.com.